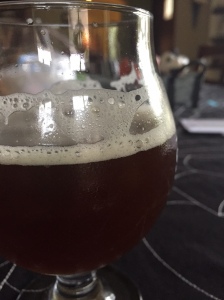 On October 29, our neighborhood hosted our third mixer of the season at Michael & Nicole’s perfectly restored 1923 craftsman charmer. Mixers are casual events where each attendee brings a small snack to share, and we all hang out in the host’s backyard. We always get some really interesting and delicious contributions. The neighborhood association provides the wine.

Now, a bit about our neighborhood. We love our wine. We go through gallons of the stuff at each mixer… curiously at this mixer, no one touched the stuff. Why you ask? I think it had something to do with the three giant beer taps that greeted us as we entered the backyard. Michael is a brewer, you see, and he had crafted three delicious brews for this event which he generously shared with the neighborhood. There was a table full of tasting glasses waiting to be filled when you arrived in the backyard. (Like actual glass, about 100 of them! These people don’t mess around with their tastings.) The instructions were to taste from left to right. The first was a Cream Ale, which was light and refreshing. The second was a Spooktober Fest Ale, which was a dark and malty brew, similar to a dunkel. The last was a Dark Pumpkin ale, which was a rich, malty and flavorful stout like brew. With all these options, wouldn’t you have gone with the beer too? That’s what I thought.

So I began on the left, took a sip, and looked up to comment to Alex about how good the Cream Ale was, and Alex had disappeared. Nicole let me know that they had their brewery set up in the garage, so I knew exactly where to find Alex. Not surprisingly, I found Alex inspecting all Michael’s brewing supplies (and making his mental holiday wish list in his head). Bonus: Michael works for a local company that designs brewing equipment. So technically, he HAS to brew to “product test” all these tools. Rough job, huh?

How to be Neighborly: Tap into your neighbor’s keg.

Coveted neighborly brewery? Perhaps. Brothers in brewing? Definitely. I left those two to discuss the benefits of the conical fermenter and I went back to the buffet in search of a snack to match my cream ale. My contribution is shown below, which paired quite nicely with the brews.

Michael & Nicole, thanks for opening up your home & your taps.  You are always welcome to belly up to our tap.  We’ll see you around the hood! 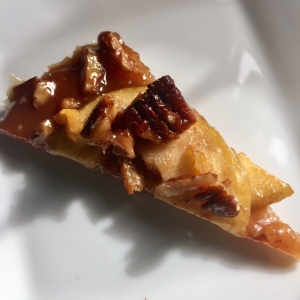 Preheat the oven to 400 degrees and make the crust. Par bake the crust for 10 minutes. While the crust is baking, slice the apples and chop the pecans. Remove the par baked crust from the oven and place the apples in 3 neat rows. Sprinkle with pecans, then drizzle with caramel. Bake for an additional 45 minutes. Slice into squares or wedges to serve.

(*) Any caramel sauce will do, but I prefer the bourbon flavor. 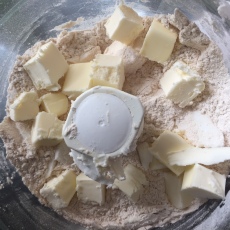 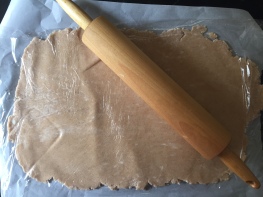 In a food processor, combine the flour, sugar, cinnamon and salt and pulse to combine. Then add the butter and shortening, and pulse until the butter is the size of peas. While the mixer is running, drizzle the water slowly into the dough and pulse until it starts to clump together. 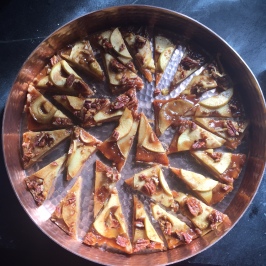 2 thoughts on “Thou shalt not covet thy neighbor’s brewery”