Our neighbor recently purchased a fancy boiler that sounds a bit like a jet engine, so it reaches a boil in no time at all. In need of something to boil, she decided on crawdads, complete with all the Southern Boil fixin’s: Corn, sausage, and potatoes. Our first attempt at a Neighborly Southern Boil was Crawdad: Interrupted by a failed UPS delivery. Our second attempt, however, was deliciously successful. We happily joined her for the feast. 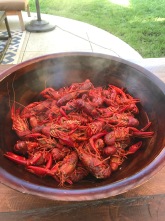 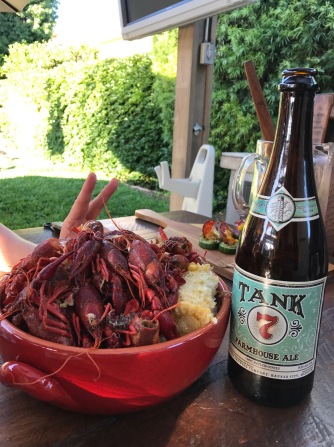 While she toiled over the boil, we sipped our Flora Farm Inspired Bloody Mary’s. While the Crawdaddies were the star of this show, I brought an appetizer to play a supporting role. I opted for some fresh veg and candied meat. Yes, I said candied. Don’t knock it ‘till you try it, and you really should try it… southern boil or not.

Meanwhile, combine the mascarpone, pesto, garlic powder, ¼ tsp salt, and lime in a small bowl and stir to combine. Using a grapefruit spoon or small knife, scoop a bit of the seeds from each cucumber slice, being careful not to leave a hole on the bottom. Scoop about 1 tsp of mascarpone mix into each cucumber cup. Top with a slice of chorizo and a tomato. Sprinkle with sea salt and serve cold. 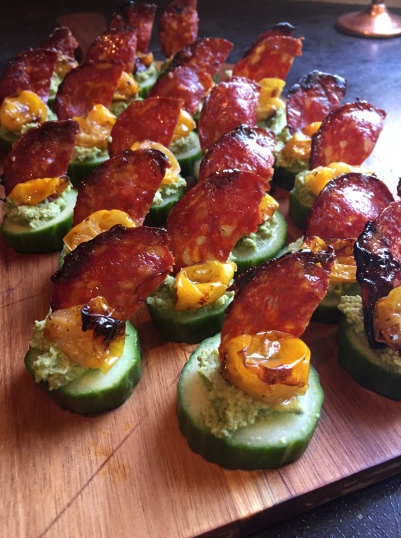 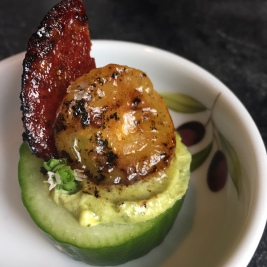 (*) Spicy pesto was courtesy of our (new) friend Fabrizio of the Italian Job in Cabo.