Our friends with the pizza oven invented a new reason to fire it up last night: A Crust Off. Add competition to anything and I’m there. I never said I wasn’t competitive. The goal was to identify the perfect crust for future, larger, pizza parties. 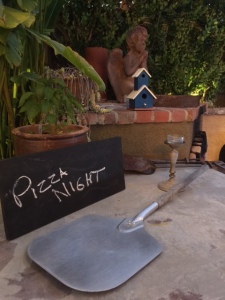 The plan was in the works for a week. On Wednesday, we received specific instructions via email. Arrive early, 6:18 pm to be precise, recipe in hand, ready to set up the pizza station. Toppings would be provided, but we were instructed that if our crust would be “shown in a better light by your own toppings, please go for it.” The competition would begin at 7:00 pm. This was serious business.

I’d been travelling in Chicago all week and arrived home on Thursday at 9:45 pm. Friday I was in the OC, and was running around town visiting my clients. I left work early, 4:12 pm to be exact, stopped at the store for flour and yeast at 4:23 pm, and sped home to assemble and get my dough rising by 5:15 pm. My dough needs 1 hour to rise, so you can see the time line is important. It’s a 3 minute walk to the pizza oven. Nailed it.  I’m very punctual. 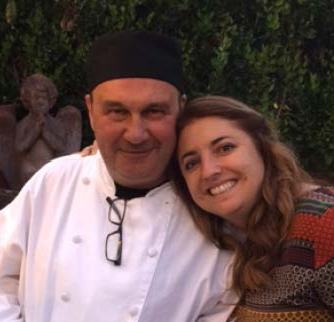 Wayne, the consummate host and me 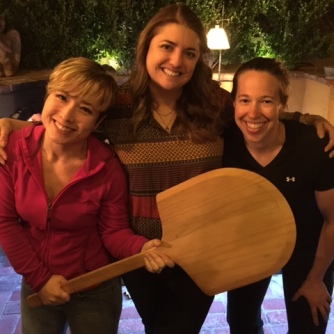 Three neighbors volunteered their creation for judgment: me, Ashley, and Kim. Although the host had also made some dough, he felt the home field advantage was too unfair to enter the competition himself, although we all enjoyed his offering. The judges were chosen: Jess, Jeff, Eric, and Rich. The competitors agreed that each dough should have the same toppings for fair judgment to occur. The dough’s were numbered, and randomly presented to the judges.

The first crust was very crispy, with strong wheat flavor… it felt healthy. The second crust was crisp on the outside, soft on the inside, slightly sweet. The final crust was also crisp, and very yeasty. All were good, and surprisingly different given they all contained the same thing: flour, salt, water, and yeast. 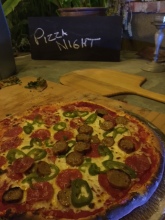 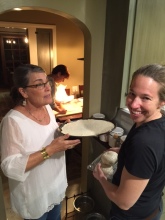 Rolling out the dough with Mary, Mila and Ashley 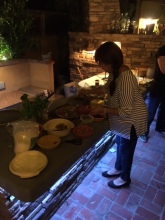 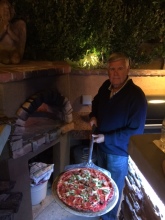 It was time for judgment. It was unanimous. The second crust was the winner. Whose was it? It doesn’t matter, they were all great. In the words of our host:

“We are all winners. Eat well”

That’s how to be neighborly, my friends, and yes we ate very well. The winning recipe is below. Ciao.

Check out the chandelier

Place water, olive oil, honey and yeast in stand mixer with dough hook and allow the yeast to bloom (about 3-5 minutes). Add flour and salt and mix on low until it comes together and pulls away from the sides. It should be one big ball attached to the hook.

Turn onto a lightly floured surface and knead for 2-3 minutes until a smooth ball is formed. Put more olive oil (about 2 Tbsp) in the stand mixer bowl to coat the sides and bottom. Roll the dough in the olive oil and cover with a clean kitchen cloth. Allow the dough to rise for about 1 hour until doubled in size.

When ready to use, knead lightly for about 1 minute, then stretch onto pizza pan. Makes 4 pizzas.

Can divide into 4 balls and save for 3 days, or freeze. 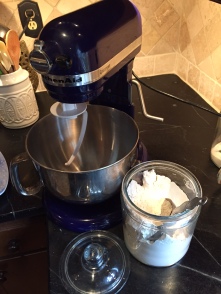 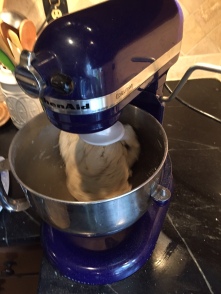 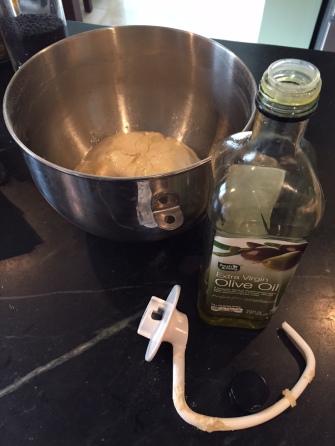