On the first Saturday of every month, DTSA opens its arms, hearts and doors to artists. Well actually, the artists are always there. In fact, the artists open up their arms, hearts and doors to DTSA and others interested in viewing their offerings. A diverse group of people descend on one square block to enjoy art of all kinds: static, interactive, demonstrative, live. This night, a group of us biked downtown to enjoy the festivities.

Near the Bike Hut storage, there was a graffiti art demonstration which we watched in wonder at how spray cans were creating such a precise and colorful display. We then headed over to the center of the artist’s district.  It’s a courtyard of brick, with a fountain in the middle, surrounded by our most historic buildings. Where we entered, there was a live demonstration was being put on by High School students. They were painting their city, beautifully I might add, on an old convertible car. In the background, musicians played string instruments. 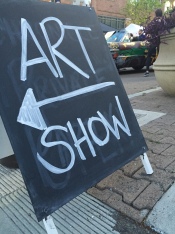 Hipcooks, a center that hosts cooking classes, had their doors open for visitors to look, learn and shop. A wedding reception was occurring in the restored electrical building in front of the central fountain where the art walk festivities were held. The couple and the party were visible behind large windows, a chance for all of us to peek into their lives. 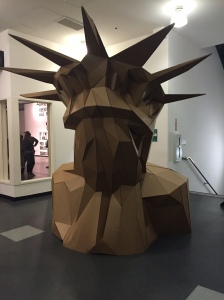 Some of the art was temporary, some of it more permanent, some of it literally disappeared as time passed. One display was a continually updated work of words, which showed thought provoking political headlines and the time posted… like a human enabled Twitter feed, on a giant marquis. There one minute, gone the next. A cardboard Lady Liberty wept in the foreground of this display. Accident?

Another was a display of video and sound, as a musician carried his drums up to the summit of a snowy mountain in France, his boots crunching in the snow as he climbed. The paintings, drawings and etchings were done on various mediums, from canvas, to wood, to plastic, to small brown paper bags (which the artist informed me were used to hide 40’s (beer), vs. my intuition that they were lunch bags… perspective).

I’m not really an art aficionado, but I do appreciate having creative people near and around me. They encourage me to think differently, or just think period. Whether I come to a conclusion, or not, is not the point. The point is to exercise the mind, isn’t it? 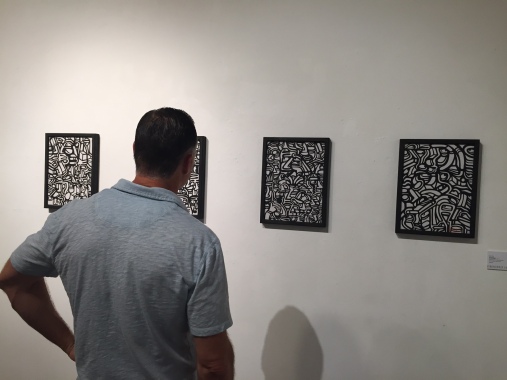