One of the treats we look forward to each summer are homemade flour tortillas from Alex’s mom. She grew up making these by the dozen each morning, and used to sell them to neighbors to make extra money, so she spins out about a dozen perfect little circles in five minutes. I, on the other hand, require a lot more time and end up with something that looks more like an amoeba. But they still taste good. These are not your average tortilla. They are thicker than your store bought tortillas and have a nice floury flavor. You know you have made a proper tortilla when air pockets form in the tortilla and they begin to puff up. You really do need to eat them right away because they don’t keep overnight. Alex gets the very first one off the griddle and loads it up with butter. He really doesn’t need anything else, but since you really shouldn’t live on carbs alone, I made shrimp fajitas to accompany the precious tortillas.

In a large bowl, combine flour and salt then mix in water and oil. Turn onto a floured surface and knead 10-12 times, adding a little flour or water if needed to achieve a smooth dough. The dough should be tender and pull apart like bread dough. Let rest for about 1 hour.

Pull off a ball of dough about 2 inches round and roll into a ball. Roll out into a 6-7 inch circle on a lightly floured surface. On a very hot griddle, cook the tortilla on one side as you roll out another tortilla. Flip the tortilla when you see bubbles form and the bottom of the bubble starts to brown. When the other side is cooked, keep the tortilla warm under a kitchen towel or in a tortilla warmer until ready to serve.

Mix all ingredients in a large bowl. When ready to cook, heat a large griddle at high heat (preferably one that fits over two burners), and pour the shrimp mixture onto the griddle in an even layer. Allow the shrimp to cook for about 2 minutes, and then begin to flip the mix with a spatula. Cook until the shrimp are pink, about 5-6 minutes. Serve with tortillas and salsa, if desired. 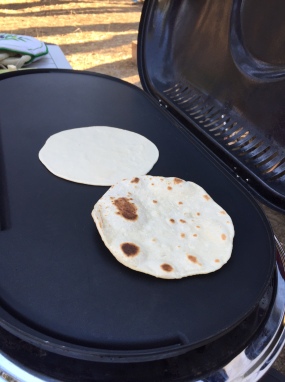 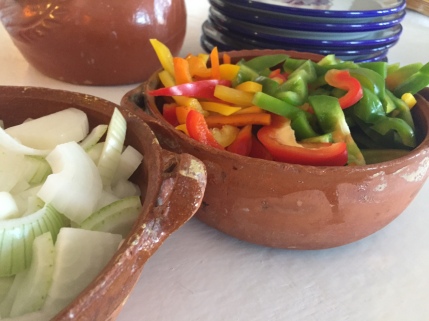