One of my neighbors has an unusual obsession with Bacon. I mean let’s face it, we all do on some level (or most of us do… or maybe I like to think it’s not just me and her). She owns an enormous number of bacon related T-shirts, which get displayed with regular frequency. Should you get the opportunity to scroll through her Instagram or Facebook feed, you’re likely to find 1) her dog, or 2) bacon topped burgers.

I’m not saying this is a bad thing. In fact, I quite admire anyone that can wear a T-shirt that says “Body by Bacon” and people think it’s a joke.  In her case, she’s not joking. I guess there’s something to that low carb craze after all.

Given her obsession with bacon, I thought I’d whip up a snack for our latest get together that contained the favored ingredient. Since others were bringing chips and dips and things, I wanted to keep it pretty light (well, as light as one can be with the inclusion of bacon). I decided to do a play on BLT’s and do a stacked cucumber dish.  It was delish.  Cool, crisp, salty, and sweet all in one bite.

I think I may have found my own new obsession. 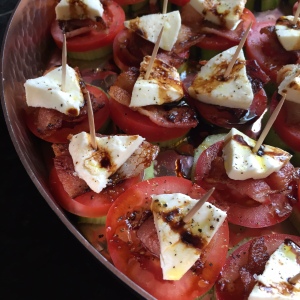 Cook the bacon slices and set on a paper towel to drain the grease off.  Slice the cucumber and tomatoes into rounds about 1/4 inch thick.  slice the mozzarella ball into 1/4 inch rounds, and cut the rounds into 5 wedges each. Cut bacon into 4-5 pieces per slice.

Stack the bites by laying first a cucumber round, then a tomato round, then bacon, then mozzarella.  Stick a toothpick through the stack to keep everything in place.  When ready to serve, drizzle each piece with oil and vinegar and sprinkle with salt and pepper.  Serve cold.

(*) If you don’t have basil oil, then use regular olive oil and sprinkle chopped basil over the bites.