Every once in a while it hits me as to why I live in Southern California.  It can be crowded, it can be hot, it can be smoggy, and it is always expensive.  Don’t get me wrong, I’m not leaving.  But here’s why:

It was just perfect.   It was my day off from work (a rarity).  The top came down, as did everyone else’s (on the car, that is).  I went shopping at my favorite stores, the view of “The Island” in the distance.  It was 75 degrees, and crystal clear… in December.  THAT is why I live here.

While driving down PCH, the radio announced a sale on Lobster at the grocery store.   Seriously?  I thought this day was already perfect enough.  So I followed the sun to the grocery store and picked up some lobsters for dinner.  Given that it felt like summer (OK, maybe spring), I made a typical summer dish.  Lobster Rolls and Potato Salad.  Perfection.

It rained the next day.  Nature’s gifts can be short lived, so I suppose we should appreciate them while we have them.

Slowly poach the lobster by putting them in a pot of cold water and bringing the water up to heat (but not boiling).  Remove the lobster while the tails are still limp and moveable(not curled), and cut the tails out with kitchen shears.  Remove the meat and chop into 1 inch pieces.  Melt the butter in a small sauce pan.  Brush some of the butter on the sides of the roll and toast both sides in a frying pan.  Add the green onions to the butter and the chopped lobster.  Cover the butter and lobster with a lid and allow to simmer on low for 3-5 minutes.

Serve on toasted rolls and drizzle with butter.  Serve with a lemon wedge. Serves 2. 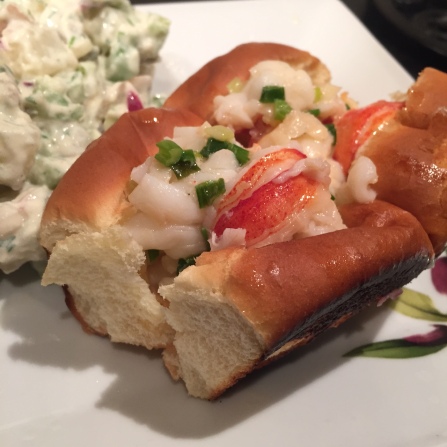 Alex hate’s mayonnaise, so I always have to figure out either how to hide it, or what to substitute.  There’s no hiding the mayo in potato salad, so here, I substitute with sour cream and lemon.

Prepare a bowl with ice and cold water.  Place the diced potatoes in a pot of cold, salted, water.  Bring the pot to a boil and remove potatoes when they are still firm, but you can insert a knife through them (about 5 minutes).  Strain the potatoes and place them in the ice water briefly to cool.  Once cool enough to touch, remove the potatoes from the water and put them in a small bowl.  Pour the juice over the potatoes so they absorb the liquid.

Meanwhile, put all the other ingredients in a large bowl and mix.  Add the potatoes with lemon juice and mix everything together.

(*) If your onions are very strong, then soak them in water for 10-15 minutes to release some of the intensity. 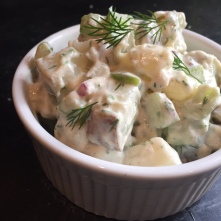 One thought on “Summer in Winter”