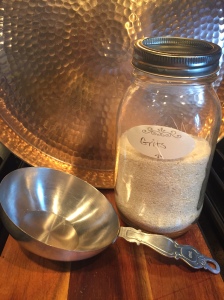 At our last garden swap, a friend let us know that he had never had grits before. WHAT???!?! Never?!?! Another friend chimed in that she had tried them a long time ago, but didn’t really like them. Oh, come on… now that’s a challenge for me!

At 5pm, the neighbors strolled over to our place, each with a bottle of wine in tow, ready to experience the life changing grits that I had promised. I know, it’s a big promise. After some chatting, we converged on the dining table and each guest puddled the grits on their plates. “Mmmmm….” we heard…. Yep. It’s that good. I think the mission was accomplished.

BUT I wasn’t done. I had some bread I needed to use, so I whipped up this super easy and tasty bread pudding. Plus, I got these amazing copper ramekins for Christmas so I’ve been dying to use them. I think our friends almost forgot about the grits when they tried it… almost.

In a large bowl, combine butter, half & half, cream, eggs, brown sugar, Grand Mariner, orange zest, vanilla, cinnamon, nutmeg, and salt and stir with a whisk until combined. Add bread, pecans and chocolate and stir together. Allow the mix to sit for 30 minutes to absorb the eggs mixture.

Spray ramekins with cooking oil to coat. Add about ¾ c of the bread mix to each ramekin. Makes 8-10 ramekins, or a 13×9 inch pan.

Bake at 350 degrees for 45-50 minutes until golden brown on top.  The pudding will puff up when it cooks, and reduce down as it cools.  Allow to cool a bit before serving.  Serve warm.

To serve, melt the vanilla ice cream in a small sauce pan and stir in the ¼ c of Grand Marnier. Top the bread pudding with the vanilla sauce. 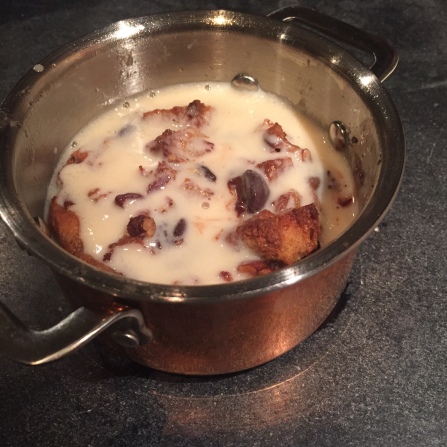 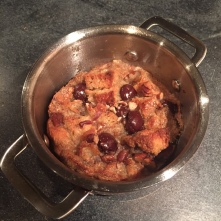 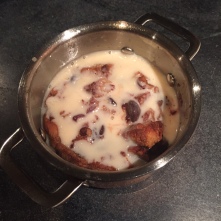 (*) For this version of life changing grits, I used Comte cheese, which is very similar to Gruyere, and omitted the cream.