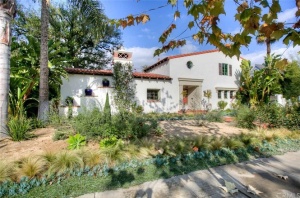 A few weeks ago, the Floral Park Garden Swap groupies descended upon “Casa E.”  The theme of the night was soup & stories.  Tanya & Greg were our gracious hosts.  They purchased their lovely home in April of 2016, after it was restored by the prior owner.  Tanya & Greg, however, have turned this home into a masterpiece with period and style appropriate furnishings.

As with any old home, this house comes with some stories of its own.  Historically registered as the “Walker House,” it’s a distinctive example of Spanish Colonial Revival architecture.  Neighbors have long whispered about its past, which include a foreclosure and alleged illicit activities. Perhaps that has something to do with the speakeasy. A wooden door in the cozy den hides an authentic and original prohibition bar.  All those rumors are now history, and this home glows anew with pride, as do its new owners. From its hand carved wood ceilings to the authentic Spanish tiles throughout, it is perfection from top to bottom.

Speaking of perfection, several neighbors brought garden inspired soups. While everything was delicious, one soup inspired me with its simplicity and flavor. It was Jeanne’s corn and zucchini chowder. I was standing at the Le Cornue stove deciding what to eat first, and Jeanne quietly ushered me to her crockpot on the kitchen counter and suggested that I try her contribution. I was glad I did. So light, simple and fresh.

With Soup in hand, Alisha, Merle and I wandered around the grand home and backyard sharing our own stories. It was hard not to drool. I can’t decide if that’s because of the soup or the house.

Here’s my attempt to replicate Jeanne’s soup.  I hope I did it justice.

This version has hominy for a heartier soup.  Jeanne’s was just corn & zucchini.  Toss in any veggie that sounds good to you!

In a medium pot, add 1 Tbsp butter, onion, carrots, celery, yellow pepper, salt & pepper and cook covered over medium low heat, stirring occasionally, until onions are translucent, but not brown (about 5 minutes).  Add in the garlic and cook for an additional 2 minutes.  Add in the corn, squash, hominy, oregano, thyme, and stock and bring to a boil, then reduce the heat to low.  Cook for 5-10 minutes until the veggies soften.   When ready to serve, add in the half & half and 1 Tbsp butter, and allow the butter to melt while stirring.  Then add lime zest and juice and serve immediately.